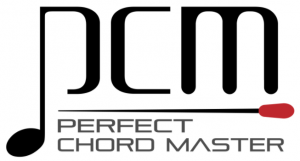 Total, 17 monotones from C to B including ＃s and ♭s

Total, 8 types of intervals of which the root notes are above monotones

Total, 5 types of triads of which the root notes are above monotones

Total, 11 types of tetrads of which the root notes are above monotones

In triads and tetrads, a total of 18 tones, that added C♭ to the root note of each chord, are regarded as key-notes, and the tonality will be set within seven key signatures including the sharp and flat key signatures.

For example, when the root note of the chord is C, it becomes C major or C minor.

The followings are the keys used in this application.

If chord names are the same, sometimes the notations differ depending on notes, instruments and genres of the music. Therefore, questions will be set in four types at the most, from the ones thought to have the highest usage rate.

For the answer, anything except for the one with the highest usage rate should be written in parenthesis.

※The major chord is often notated by only key-note.

●Regarding handling of enharmonic

Regarding enharmonic intervals where the keys pressed are the same (e.g. C＃ and D♭, and A＃ and B♭), in case the Q is tones or keys, it is difficult to judge which to write for the answer. In such cases, write down both, only if the keys exist in both.

For example, when Q is the tone and B♭minor seventh sounds, since B♭ and A♯ are enharmonic and B♭minor and A# minor both have less than seven ＃s and ♭s, they exist in this application. Therefore if it is to answer the chord name, the answer is “B♭m7, A＃m７”.

However, when Q is the tone and B♭M7 sounds, although B flat major exists, since A sharp major has 10 ＃s, it is not handled in this application. Therefore if it is to answer the chord name, the answer is only “B♭M7”.

However, this rule for keys is only for triads and tetrads. In monotones and intervals, all enharmonic intervals are written with both chord names in the answer. Yet, as described previously, this excludes the cases in which the monotone or root note are on white keys (e.g. E and F♭, and B and C♭).

They are not handled in root notes. However, they are used if they are necessary as component tones.

For example, when Q is tones and C♯aug5 sounds, and it is to answer keys and notes, the answer is “C♯/G☓”.

The reason of using×intentionally and not writing “C＃/A” is because C and A are six degrees, it is right to regard “C♯/A” as the minor sixth of C＃ instead of augmented fifth of C＃.

Not handling in root notes. However, they are used if they are necessary as component tone.

For example, when Q is the tone and C＃aug sounds, if it is to answer keys and notes, the answer is “C＃/E＃/G☓”.

In this case, intentionally use ☓ and do not write “C＃/F/A”.

This is because in augmented chord the component tone is a root note/major third from the root note/augmented fifth and is right in the theory of interval.

Like triads, they are not handled in root notes. However, they are used if they are necessary regarding the character of chord, and interval.